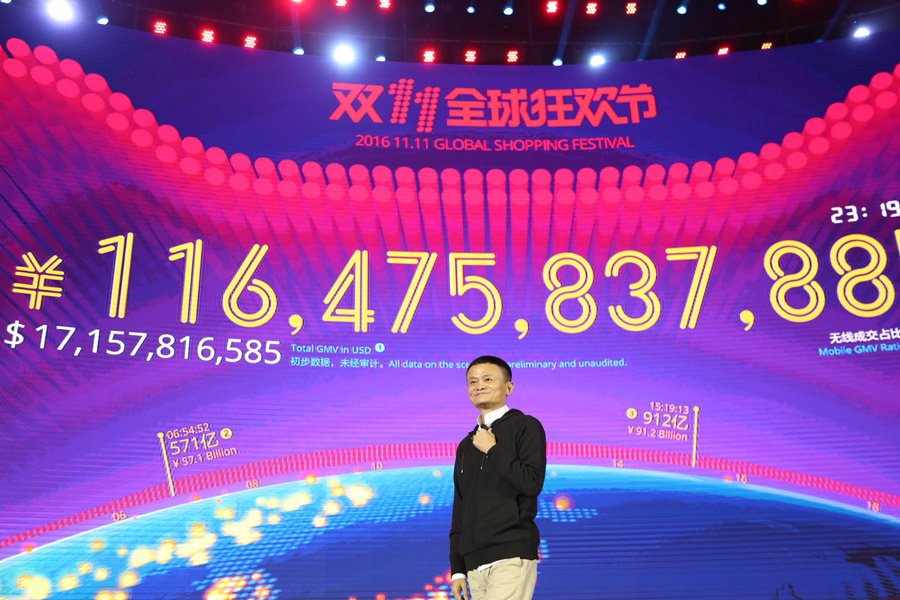 In China, November 11th is known as “Single’s Day.” It’s a fairly new occasion, started in the 90s by men who weren’t in a relationship. In 2009, Alibaba decided to associate the holiday with it’s biggest sale of the year. The tradition has since taken place every year since. Products are heavily discounted on Tmall – an eCommerce platform owned by Alibaba – on Single’s Day.

Zhang, Alibaba’s owner, decided to enhance the Tmall (which is short for Taobao Mall, the name it was launched with in 2008) brand by offering massive online discounts to the public on the relationship-less day.

On November 11th, there are plenty of opportunities to enhance both sales and brand exposure. It’s worth your while to develop a strong marketing strategy so you, too, can capitalize on Single’s Day.

While China’s retail sales have been consistent, the future is unclear. There are concerns about the effects of a potential USA-China trade war. Slow growth in the economy is also a worry.

For Alibaba on this year’s Single’s Day, a number of American pundits predict a decline in the rate of growth for the company. They think the event will lose its shine in the years to come. Some have also made the point that the discounts offered in 2018 were hardly bargains.

Nonetheless, Alibaba Group Holding expects an extra 100,000,000 customers to shop from the Taobao and Tmall online stores this year. However, they did not offer any targeted sales figures for the upcoming shopping festival.

The eCommerce company claims that the amount of participants will probably be over 500,000,000 this year. The claim is based on consumer behavior and data analyses. Given the moniker, “Black Friday in China,” the event pushes consumer demand to the limit. The numbers will be strong, considering China is the most populated country in the world.

Although this event began in China, world-renowned brands are participating in this retail holiday. Burberry, Skechers, Phillips, Michael Kors, L’Oréal, and Nike are some of the more recognizable brand names that took part in last year’s Single’s Day.

Many popular brands that participated in last year’s sale spent almost 6 months preparing for this year’s. You can take comfort knowing that the products on sale aren’t last-minute leftovers – Single’s Day is treated as a legitimate online sales event by these companies.

A big reason why Single’s Day achieves the success it does is because of the build-up to the event. You’ll see everything from musical performances to celebrity appearances hyping it up. They’ll even be fashion shows broadcasted on television. Don’t expect the products on sale to sell themselves, though. You are encouraged to focus on customer experiences.

Single’s Day in China is worthwhile for brands in the West, as they can target certain markets prior to launching a marketing campaign. There has been a spike in female consumers  in China, for instance, which dictates the products that are sold the most. These products are comprised of baby items, health/nutrition goods, and clothing. Female shoppers in China seem to be more meticulous in what they search for. These women often use social media and buyer guides online to contrast prices from various stores. Reviews are also scrolled through by female shoppers. For instance, in China, Feelunique launched a brand called Charlotte Tilbury. At one time, this relatively unknown cosmetic brand was introduced to the market through social network education partnerships and campaigns. KOL (Key Opinion Leaders) were used to create brand exposure while establishing trust. This was done with WeChat and Weibo accounts.

People from about 230 individual countries bought something on last year’s Single’s Day. Make sure your product details and promotional materials are properly translated for countries you are targeting. In addition to the text, ensure that sales are relevant to each location’s culture. Each country’s currency should also be changeable for users. If certain locations charge tax, they will have to be factored into the transaction process, too.

The eCommerce platforms used for Single’s Day in China provide all the scope you need for creative promotion. For instance, if a Tmall web page for merchants is set up, content can be streamed to your consumers. Chinese KOL value can be leveraged, and their feeds on social media can display a countdown in real time to hype the event up for potential customers. Recommendations can be published on social media feeds, too. You can cross-fertilize your content and message with a multi-channel strategy. If you have the budget for it, live streams are worth considering to garner excitement about the shopping event.

Since backorders are not permitted or feasible, the only products you list should be the ones you can fulfill. Be clear on your supply quantity. Inform customers that inventory is running scarce, if necessary. Doing so will influence a quicker purchase of those items.

Don’t just make your site mobile-friendly – enhance the appearance and allure of your site. Historically, 90% of purchases made on Single’s Day were done through mobile devices. Many transactions in China are performed on smartphones and tablets, regardless.

Single’s Day is like merging holiday shopping with the Superbowl. That’s the magnitude of the largest consumer event in China.

Sales figures for Single’s Day in 2017 was $25.3 billion, dominating Amazon’s Prime Day in 2018, which drove in sales of $4.2 billion. 2019 will mark the 10th anniversary of the sales event, and over 180,000 companies are believed to take part in the holiday. 500,000 products, give or take, are expected to be on sale. For Adidas, Levi’s, Mercedes Benz, and other non-Chinese brands, November 11th is a great opportunity, but it also comes with challenges – specifically in regards to ad navigation options (so that specific consumers in China can be targeted).

Single’s Day began as an Alibaba event, but has since extended to Taobao and Tmall. Marketers who wish to target shoppers in China will need to navigate through the country’s complicated media purchasing protocols. Ad purchases are not programmatic here – things are manually done, and all ads must be in accordance with China’s rapidly changing regulations, which are enforced by the government. Customers making queries about products generally do so using mobile devices. As such, brands must assertively budget ad funds to accommodate China’s broad digital market.

WeChat is a social media platform that brands can create home sites with. They can also publish ads on other platforms, namely the video streaming site called Youku, the digital travel booking site called TuNiu, and Alibaba’s payment platform, Alipay.

Banner ads, native content, and home-screen takeovers are all tactics to direct customers towards Alibaba’s ecosystem. Consumers eventually find their way to the brand’s store on Taobao or Tmall. There’s more: coordination of in-app promotions is done through Alimama (the marketing service Alibaba uses), as well as a Taobao or Tmall vendor or agency. This helps brands all over the world capitalize on the nuances of each platform.

For shoppers in China, ads for Single’s Day begin showing up 1 month or so before the holiday. A week before, Prime Time begins: consumers can start adding products to their carts on Taobao and Tmall. Whatever’s in the cart will automatically be purchased on November 11th.

Strategizing for the big day happens about 180 days ahead of it. That’s when brands begin securing priceless real estate, such as banner ads or app takeovers. Things can get competitive and justifiably so. What some brands sell over a 60-day span can be matched on 1 Single’s Day event. To create awareness, brands should establish sales targets to strive for. From there, they can work alongside third-party groups to determine how much money to budget for ads to achieve those goals.

Is anything different happening this year?

Influencer Campaigns are Being Live Streamed by Brands to Stimulate Demand

Taobao, an eCommerce provides live video streaming on its platform. Alibaba uses it to promote Single’s Day. In 2017, live streams on Taobao generated more than $15.1 billion USD in sales, a figure that almost quadrupled the one from the year prior.

When live streaming sessions (which are similar to QVC in America) are taking place, influencers and young hosts show how products work in real-time, illustrating their advantages and disadvantages. Viewers get a sense of how a product works when used, adding value and stimulating demand.

Further, viewers can ask questions with messaging systems in real-time. For example, they can ask what a certain fabric’s texture is like, or if a certain blouse goes with a specific skirt. The natural engagement of live streaming sessions generally results in greater user interaction, as well as a 32% boost in conversion rates, on average.

One of the more popular brands capitalizing on live streaming for this year’s Single’s Day is Estee Lauder. The brand has live-streamed influencer campaigns since October 23rd, directing viewers to Tmall and Taobao pages. Viewers have the option to place deposits on items in limited quantity to reserve what they want on Single’s Day.

Also worth keeping your eye out for in 2019 are short-form videos, which are an alternative to live streaming.

In the winter of 2018, Tik Tok (aka Douyin, a platform for short-form videos in China) started testing out various eCommerce functions. Brief videos on this platform resulted in sales totaling more than $28,000,000 USD (200 million RMB) for merchants on Taobao.

A number of influencers have the option to connect videos to promotions and products in Taobao stores. After a user clicks a link, they’ll be directed to a product preview page (without leaving Tik Tok). After clicking the relevant link, they can buy something directly from a Taobao page.

It is a seamless process, and only a couple of finger taps are necessary to get things rolling. For marketing purposes, brands sometimes put together campaigns for pre-sales. Viewers can be directed to landing pages through short videos. Users have the option to leave a deposit on certain products to they can buy them on Single’s Day before anyone else.

Alipay, the online and mobile platform owned by Alibaba, is holding campaigns of their own to hype customers up for Single’s Day in 2019. More than $283 million USD (2 billion RMB) worth of digital cash will be issued to users that download Alipay’s latest version.